BUILDING A BETTER WORLD ONE NOTE AT A TIME 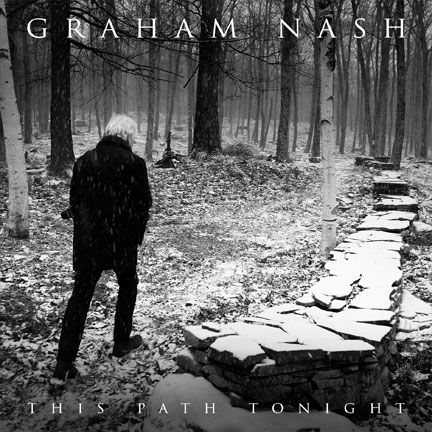 Legendary singer-songwriter Graham Nash announces 2016 US Tour and the release of his new studio album, This Path Tonight on April 15, 2016. The album will be released on CD, Digital and Vinyl thru Nash’s Blue Castle Label, distributed thru ADA worldwide.

This Path Tonight is the new studio album and collection of 10 original songs from Graham Nash. Produced by Shane Fontayne, this is Nash’s first solo record of new music in fourteen years. The album is one of reflection and transition of a singer-songwriter whose career (the Hollies, CSN, CSNY) has spanned more than five decades and counting.

“What a pleasure it was recording this album,” says Graham Nash. “Shane and I had written 20 songs in a month and recorded them in eight days. The music has a different feel to my earlier albums although I hear echoes of each one. This journey of mine was one of self-discovery, of intense creation, of absolute passion.”

This Path Tonight is available for pre-order now through Amazon and iTunes.

In support of the new studio album Graham Nash has announced the first string of dates on his 2016 This Path Tonight Tour. Along with guitarist and producer Shane Fontayne, Graham Nash will perform a series of dates across the United States in 2016, starting January 27 in Ponte Vedra, FL and wrapping up February 22 in Tarrytown, NY.

Fans who pre-order the new studio album, will have first in line access to pre-sale seats through the official Graham Nash website beginning December 1, 2015. Nash will continue his long-time tradition of raising money for charity through the Guacamole Fund’s special benefit seats; in addition, he will be donating $1 per ticket sold to charity. Advance tickets for this show, including special benefit seats, go on sale December 1 in conjunction with Giving Tuesday.

“When you strip a song down to its very essence, you either have a song worth singing… or you don’t,” says Nash. “Playing music with Shane Fontayne is and always will be very satisfying. He has an innate sense of ‘performance’ and of arrangement. He never loses sight of the fact that the song must ‘come alive’, must have a reason for being sung in the first place. We want to look in the eyes of our audience, we want to know that we are connecting on a very real level. What a pleasure this tour will be for me.”

Graham Nash is a two-time Rock and Roll Hall of Fame and Songwriter Hall of Fame Inductee, Grammy Award winner, a New York Times best-selling author, and Officer of the Order of the British Empire (O.B.E.)

For more information about Graham Nash – This Path Tonight, please contact Michael Jensen at Jensen Communications at (626) 585-9575 or info@jensencom.com.

6 years ago in News
Comments

LAUREL CANYON RECORDS IS AN ARTIST RUN COMPANY DEDICATED TO FURTHERING THE EFFORTS OF ARTISTS, ASSOCIATIONS AND OTHER BUSINESSES THAT PROMOTE THE USE OF MUSIC TO MAKE THIS WORLD A BETTER PLACE.
A PORTION OF THE NET PROFITS OF EVERY LAUREL CANYON RECORDS PROJECT WILL BE DONATED TO SOCIAL CAUSES OR HUMANITARIAN ENDEAVORS.